The production of ethylene by soybeans symbiotic systems associated with different Bradyrhizobium strains during the treatment of seeds with fludioxanil (fungicide) and exposure to drought was studied. It was found that the intensity of ethylene release by soybean plants during pre-sowing fungicide seed treatment and insufficient water supply primarily depends on the genetic characteristics and symbiotic properties of the of Bradyrhizobium strain. It is shown that the treatment of soybean seeds with a fungicide does not significantly change the dynamics of ethylene production by soybean plants in symbiosis with different strains of Bradyrhizobium japonicum under drought conditions. This proves the possibility of using seed inoculation with active rhizobia strains in combination with fungicide treatment for soybean cultivation in arid conditions.

Ethylene is an important regulator of many physiological processes in higher plants, including legumes (Khan et al., 2017; Dubois et al., 2018). In the formation of legume-rhizobial symbiosis, it participates in the immune response of the host plant, organogenesis of the nodules, the location of the nodules on the roots, bacterial differentiation and aging nodules (Reid et al., 2018). Ethylene functions as a mediator of plant responses to stressors of biotic and abiotic nature (Dubois et al., 2018; Nascimento et al., 2018; Riyazuddin et al., 2020). It is believed (Wang et al., 2002) that ethylene synthesis is necessary for the transduction of the external signal and indicates the transition of cellular metabolism to a stressful state, initiates the formation of general and specialized mechanisms of adaptation. The formation of stress-induced ethylene is considered one of the fastest plant responses to the action of stressors, including its defense systems (Chen et al., 2022). In this aspect, studies of the participation of this phytohormone in the formation of legume-rhizobium symbiosis under the action of stress factors of various nature are relevant. It has been previously investigated that the synthesis of ethylene by soybean plants during fungicide seed treatment under optimal growing conditions depends on the effectiveness of symbiotic systems with rhizobia strains, their ability to realize their symbiotic potential (Mamenko et al., 2020). Soybean is a very sensitive crop to growing conditions (Kunert et al., 2016), so any changes in environmental conditions, especially temperature and water regime, can affect the formation of its symbiosis with nodule bacteria. In this aspect, it is promising to study the intensity of ethylene production by soybean plants in symbiosis with different genetic characteristics and diversity of Bradyrhizobium strains under drought conditions. Exploring the possibility of using fungicidal treatment of soybean seeds under drought is important to identify effective symbiotic systems with rhizobia, which are able to realize their adaptive potential. The aim was to study the production of ethylene by symbiotic soybean systems formed by different genetic characteristics and efficiency of rhizobia strains during seed treatment with fludioxanil (fungicide) and exposure to drought.

The studies were conducted under controlled vegetation conditions using soybeans plants (Glycine max (L.) Merr.) of Almaz variety–an early ripening variety, recommended for cultivation in the Forest-Steppe of Ukraine. Soybean-rhizobium symbioses of different efficiency were created by inoculating soybean seeds with strains of nodule bacteria (Bradyrhizobium japonicum) (titer 108 cells per 1 ml), which differ in genetic characteristics and diversity: active, virulent Tn5 mutant B1-20–created by transposon mutagenesis with Esherichia coli S17- 1 with plasmid pSUP5011 containing transposon Tn5 (pSUP5011::Tn5mob) at the Institute of Plant Physiology and Genetics of NAS of Ukraine; inactive, highly virulent strain 604k–a mutant that has lost the ability to effectively symbiosis and isolated from the nodule during the passage of strain 604 through soybean plants in the zone of high radiation–«cesium spot» (Tolkachev et al., 1999).

Before sowing, soybean seeds were treated with a solution of fludioxonil (25 g/L), and then inoculated with rhizobia suspensions (B1-20 and 604k) for one hour. The plants were cultivated in pots on sandy medium with the addition of Herligel nutrient solution (0.25 nitrogen norm). Drought stress treatments were measured and applied based on the Field Capacity (FC). The plants were exposed to different water regimes–60% FC as control (optimal water supply), 40% FC (moderate drought) and 30% FC (severe drought). Drought was created by stopping watering of plants from sowing seeds to substrate to the stage of cotyledons (40% FC) with increasing its action in the stage of primordial leaves (30% FC). Watering of plants was resumed to the optimal level (60% FC) in the first true leaf stage. Soybean plants inoculated with rhizobia without the use of fungicide treatment, which were grown under optimal water supply conditions, served as controls.

To determine the intensity of ethylene release, samples of plant material of known mass were placed in 75 ml glass vials that were sealed and left in the dark for 24 hours (Guzmán & Ecker, 1990). After incubation, the ethylene-containing gas mixture was analyzed on an «Agilent GC system 6850» gas chromatograph (USA) with a flame ionization detector. The volume of the analyzed sample of the gas mixture was 1 ml. Pure ethylene (Sigma-Aldrich, USA) was used as a standard. The amount of ethylene isolated from the incubated sample was expressed in nmol C2 H4 per plant. The data are presented in the figures as x ± SD (x ± standard deviation). Differences between values in the control and experimental groups were determined using the Tukey test, where they were considered significant at P<0.05.

Inoculation of soybean seeds with different genetic characteristics and diversity of Bradyrhizobium japonicum in the conditions of optimal water supply led to significant production of ethylene by plants in the stage of primordial leaves. In particular, in the soybean symbiotic system with inactive rhizobia strain 604k ethylene release by plants increased by 82.7%, and in soybean symbiosis with active Tn5 mutant B1-20–by 89.4%, compared with its synthesis in soybeans without use of bacterization (Fig. 1A-1C). It is in the stage of primordial leaves that nodule primordia are formed on soybean roots, and it is known that the phytohormone ethylene plays a key role in the regulation of the formation and initiation of nodules on legume roots (Weller et al., 2015). 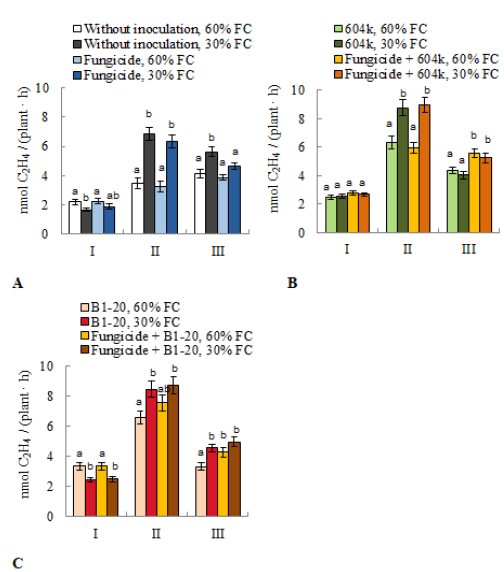 Figure 1: A): Stress-induced ethylene production by soybean plants without seed bacterization; B): inoculation with rhizobia of strain 604k; C) Tn5
mutant B1-20 in the stages of cotyledons (I), primordial leaves (II) and the first true leaf (III) ); (x ± SD, n=10).

The intensity of ethylene release by soybean plants in symbiosis with Bradyrhizobium japonicum in drought conditions for fungicide seed treatment depends primarily on the genetic characteristics and symbiotic properties of strains. Pre-sowing fungicide seed treatment under the influence of drought does not have a negative impact on the formation of different soybean symbiotic systems with Bradyrhizobium strains, which proves the possibility of their joint use in soybean cultivation.