We used corn seeds from maize (Zea mays L.) of the Dnieper 196 SV hybrid to analyze pre-sowing seed bacterization and treatment with biogenic silicon that could be promising in growing maize hybrids. The chlorophyll content in the leaves of corn plants gradually increased in growth phases and reached its maximum in the phase of milky ripeness of grain under the presowing seeds bacterization with Paenibacillus polymyxa KB and seed treatment with Biogenic Silicon (BSi). The corn yield during both variants of seed treatment increased, exceeding the control by 28.8% and 23.4%, respectively. Both variants of presowing seed treatments are promising in the growth of maize hybrids.

Maize (Zea mays L.) is one of the most common and important cash crops in the world. Maize, because of its biological properties, is widely used not only in animal husbandry but also in the food and pharmaceutical industries to produce biofuels (Galindo et al. 2019; Galindo et al. 2020). The grain quality of this crop depends on the combination of weather/climate, soil factors, and cultivation technology. The problem of providing corn grains could be solved in several ways by increasing the yield of hybrids and their adaptability to environmental stressors, as well as by expanding sown areas using modern technological methods of growing corn. These techniques can involve the use of plant growth regulators that have a complex effect on growth and development (Galindo et al. 2020; Panuccio et al. 2018; Bakhat et al. 2018). There are various ways to use plant growth and development regulators, including presowing seed treatment, seed bacterization, spraying the plant at different stages of its development, foliar feeding, or a combination of several methods (Sharma et al. 2015). The one of the most effective ways to influence plant growth and development processes and resistance formation to the various environmental stressor is the presowing seed treatment with different biologically active substances or its combinations. The aim of the present work is to investigate the effect of microbial preparation of plant growth promoting rhizobacteria and chelate complex of Biogenic Silicon (BSi) on photosynthetic pigments and yield of corn grain.

This study was carried out in Nizhyn, Chernigiv region, Ukraine. Seeds of corn (Zea mays L.), Dniprovsky 196 SV hybrid, were used in the present study. The Dniprovsky 196 SV maize hybrid was created at the Institute of Grain Crops of the National Academy of Agrarian Sciences of Ukraine (Dnipro, Ukraine). Before sowing, the seeds were treated with the preparations studied. The experiment used the microbial preparation Polymyxobacterin (Institute of Agricultural Microbiology and Agro-industrial Production of NAAS, Chernigiv, Ukraine), based on the active growth promoting rhizobacteria, Paenibacillus polymyxa KB (P. polymyxa; TU U 24.1-00497360-004:2009). Bacterization of corn seeds (1 ml per 300 g of seeds) was performed according to SOU 01.11–37–783. The BSi chelate complex is a biologically active immunoprotector (BAI-SI) (“Agroecotech” Ltd., Kyiv, Ukraine) based on silicon (active substances: silicon in ionic form (silicon oxide), 5%-7%; potassium oxide, 2.2%-3.3%; and trace elements including iron, copper, and zinc).  Seed presowing (300 g) with a BSi chelate complex was performed in doses of 25 ml L-1 of water. The processing time of the corn seeds was 1 hour. After seed treatment, corn was sown in a square-nested manner in the field soil. The soil cover of the experimental field is chernozem podzol, low humus. The total area of the sown area was 88 m2. Field trials in our work were repeated during 2017-2019. The study was arranged as a completely randomised design with 3 groups and three replicates: 1) control (C); 2) seed bacterization (B); 3) seed treatment with BSi (Si). Leaf chlorophyll in different phases of ontogenesis (3-5 leaves, panicle ejection and milky ripeness of grain phases) and carotenoids at the mature of the grains were extracted with 95% ethanol. The absorbance of the supernatants was measured at 450 nm, 649 nm, 654 nm, and 665 nm. Chlorophyll and carotenoid concentrations were calculated according to (Sumanta et al. 2014). The data were analyzed with computer-based software XLSTAT following the analysis of variance. A Student’s t-test was used for the statistical analysis. Differences in values were considered statistically significant at p≤0.05. Results are expressed as mean and Standard Deviation (SD) of the mean. Mean (±SD) was calculated from three replicates for each treatment. 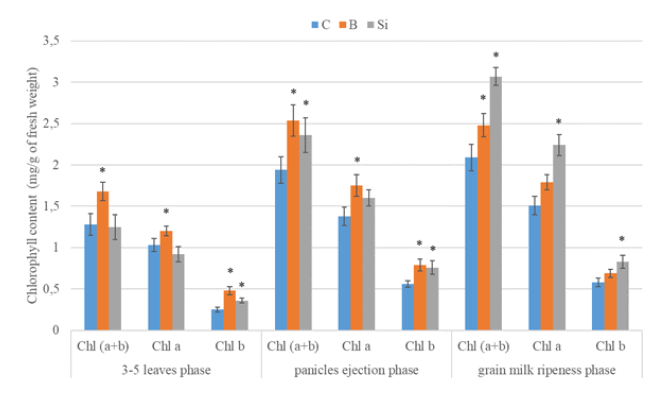 In the present study, the chlorophyll (a+b) content in leaves increased following presowing with the studied preparations during the ontogenesis phases. During the 3-5 leaf phase, presowing bacterization led to an effective increase in chlorophyll a and b content. This effect of presowing bacterization may be due to the presence of phosphate-mobilizing bacteria, P. polymyxa KB. In the rhizosphere of plants, these bacteria transform complex soil compounds, which become available for plant nutrition, increase the size of the root system, and improve phosphorus nutrition (Galindo et al. 2019). Phosphorus, as a component of key biomolecules (nucleic acids, phospholipids, and ATP), is associated with energy conversion systems in a living cell, stimulates the intensity of photosynthesis and respiration, leading to an increase in chlorophyll content in the green parts of the plant (Galindo et al. 2019; Kollárová et al. 2019). During panicle ejection phase, pollen formation is completed and the organogenesis of female inflorescence continues. At this period of ontogenesis, both methods of presowing treatment had an effective influence on the chlorophyll content in the leaves. According to our results, the chlorophyll content in corn leaves gradually grew by stages of growth and development and reached its maximum in the milky ripeness of the grain phase. This effect can be explained by improving plant nutrition, increasing the vital activity of protoplasts, and growing plastid cells, leading to an increase in green photosynthetic pigments in cells. At the milky ripeness of the grain phase, presowing treatment with BSi was more effective in increasing the chlorophyll content in corn leaves. Such a high efficiency of the effect of this preparation on the content of green photosynthetic pigments can be explained by the fact that BAI-SI is a chelate complex of vital BSi in the form of aqueous solutions. Silicon, the micro-element, is part of all cell walls in plants. This microelement forms the double cuticular-silicon shell on the surface layers of the leaf, the root system, and the stems, which protects plants from excessive moisture loss, as well as from the penetration of fungal hyphae and other pathogens. Furthermore, in plant cells, silicon, along with others, functions by forming hydrophilic silicate-galactose complexes, which bind to free water and thus increase the water holding capacity of cells and plants in general (Jang et al. 2018). By increasing the level of solubility, soil phosphates under the action of active silicon compounds, including silicic acid, increase soil and phosphorus uptake by plants. This activates photosynthesis processes, ATP synthesis, and amino acid, carbohydrate, and fatty acid synthesis (Crusciol et al. 2018; Kollárová et al. 2019). Chlorophyll is not only the main pigment of photosynthesis, but also the main plant yield factor. In the present experiment, presowing seed bacterization and treatment with BSi led to an increase in yield by 28.8% and 23.4%, respectively (Tab. 1) compared to the control. The authors of (Crusciol et al. 2018) also found similar results. Yield is the most important indicator of a crop. In this experiment, presowing seed bacterization and seed treatment with BSi maintained a significantly higher yield compared to the control.

Table 1. Effect of seed bacterization and seed treatment with BSi on maize yield, 2017-2019.