Effect of gibberellic acid and tebuconazole retardant on leaf mesostructure formation and pigment apparatus of scoto- and photomorphic maize seedlings (Zea mays L.)
All submissions of the EM system will be redirected to Online Manuscript Submission System. Authors are requested to submit articles directly to Online Manuscript Submission System of respective journal..

The influence of gibberellic acid and antigibberellic drug tebuconazole on the peculiarities of leaf mesostructure, photosynthetic pigments accumulation and chlorophyllase activity in the leaves of scoto- and photomorphic seedlings of maize was analyzed. Leaf thickness was significantly reduced under gibberellic acid influence and increased under tebuconazole action compared with control in light and in the dark. These changes were determined by the fluctuations in chlorenchyma thickness and the size of upper and lower epidermis of the leaves. Under tebuconazole action there was a significant increase in stomata quantity per area unit of the abaxial surface of leaf while their linear size was reduced. Under tebuconazole influence, chlorophyll a content increased compared with control. There was a decrease in chlorophyll b content, which, in our opinion, indicates that the drug inhibits chlorophyll conversion process. Gibberellic acid led to a slowdown in chlorophyll a synthesis and decreased the total chlorophyll content. The decrease in chlorophyll content occurred due to increased chlorophyllase activity. The changes indicate the inhibition of formation of light-harvesting complexes of photosystems I and II by gibberellin.

The concept of plant source-sink relations provides for the possibility of regulating the flow of assimilates from places of synthesis or temporary deposition to zones of growth and active metabolism (Kuryata et al. 2018; Kuryata & Golunova 2018; Khodanitska et al. 2019). The most studied is the regulation of these relations in the system of photosynthesis-growth, where photosynthesis plays the role of donor, and growth–the acceptor of assimilates. However, the peculiarities of the use of spare substances deposited in the seeds during the heterotrophic phase of development (germination period) remain largely unexplored. The transition from etiolated growth (scotomorphogenesis) to photomorphogenesis is one of the most important stages of plant ontogenesis. Recent work confirms the role of light or its absence in the regulation of chloroplast biogenesis, transcription of their genes, protein factors (Zhang et al. 2020).

Whereas the realization of light signals is under hormonal control, plants also respond to exogenous treatment of plants with phytohormones (Jiang & Li 2015). The AtGA3ox1 gene biosynthesis has a positive effect on phytochrome activity, increasing the level of bioactive gibberellins. There was a positive correlation between changes in the biomass and length of the hypocotyl of beans with the gibberellin content in the dark, while there was a negative correlation between these parameters in the light (Golovatskaya & Karnachuk 2007). Significant morphophysiological effects on the plant are exerted by modifiers of phytohormones (Jiang, 2020). Photomorphogenesis activation is carried out through photoreceptor complexes–phytochromes, cryptochromes and phototropin (Wang & Lin 2020). The process is accompanied by the formation of gradients of phytohormones, in particular, gibberellins, and changes in the intensity of the formation of natural inhibitors (de Wit & Pierik 2016).

The formation stage of the main pigment-protein complexes of the photosynthetic apparatus is a multistage process. It relates primarily to changes in the native pigment apparatus and the emergence of photochemical reactions of the electron transport chain, closely related to photosystem I and photosystem II (Janečková et al. 2019). However, the literature data on the regulatory role of phytohormones, in particular gibberellins, in the formation of photosynthetic apparatus during the transition from scotomorphogenesis to photomorphogenesis are limited and contradictory. In this regard, the aim of the research was to establish the features of leaf mesostructure formation, synthesis of photosynthetic pigments under the action of gibberellic acid and its antagonist tebuconazole in scoto- and photomorphic maize seedlings.

The work was carried out on maize seedlings, cv. Aromatna. Pretreatment of seeds was conducted with aqueous solutions of gibberellic acid (0.025%) and an inhibitor of its synthesis triazole-derived drug tebuconazole (0.05%). The seeds of the control were soaked in distilled water for 24 hours. After soaking, the seeds were sown in ditches with wet sand, and the biological repeatability was fivefold. The experiment was performed under light (about 500 lux) and in the dark to study the implementation of programs of scoto- and photomorphogenesis.

The mesostructure of the leaf was analyzed on the day of 18 of germination, after the display of clear anatomical and morphological differences between experimental variants. The plant material was fixed in a mixture of equal parts of ethanol, glycerin, water with the addition of 1% formalin. The primary leaves of seedlings were selected for anatomical analysis. The size of the anatomical elements was determined by a microscope Mikmed-1 (RF) using an ocular micrometer MOV-1-15x (RF). Chlorophyllase activity and the content of various chlorophyll forms and the carotenoid content were determined spectrophotometrically (Havrylenko & Zhyhalova 2003) on ULAB 102UV (China). Statistical data processing was performed using the software program Statistica 6.0. The reliability of the difference between control and experiment was determined by Student’s t-test. The tables and figures show arithmetic mean values and their standard errors.

It is known that mesostructural organization of leaves significantly affects its photosynthetic activity (Rogach et al. 2018). The available data relate mainly to histological changes during the active growth period, but there is no data on the mesostructural features of leaves of scoto- and photomorphic plants. The data obtained allow inferring the significant influence of gibberellic acid and retardant on the histogenesis of leaves of scoto- and photomorphic corn seedlings (Tab. 1).

Table 1. The impact of gibberellin and tebuconazole on the anatomical structure of primary leaves of maize (the day of 18 of germination).

It was found that in seedlings developed in the light, leaf thickness was greater than in etiolated seedlings. Basically, such changes were determined by better development of the main photosynthetic leaf tissue–chlorenchyma. Leaf thickness was significantly reduced under the influence of gibberellic acid and increased under tebuconazole action compared with control in light and in the dark. These changes were determined by the corresponding fluctuations in the thickness of chlorenchyma and the size of the adaxial and abaxial epidermis of the leaves.

The formation of the leaf respiratory apparatus is of great importance for effective photosynthesis. As can be seen from obtained data, there was a significant increase in the number of stomata per unit area of the abaxial leaf surface while their linear size was reduced under the action of the antigibberellic drug tebuconazole. At the same time, these indicators did not differ from the control under the action of gibberellin. The more clear effect of tebuconazole on the mesostructure characteristics of leaves of photo- and scotomorphic maize seedlings compared to exogenous gibberellic acid is explained, in our opinion, by the fact that the mechanism of this drug action is to block the synthesis of gibberellins. Less effective influence of exogenous gibberellin on these indicators is explained, obviously, by high maintenance of seedlings with native phytohormone

The drugs had different effects on the synthesis of photosynthetic pigments in the leaves of light-grown and etiolated seedlings (Tab. 2). Under the influence of tebuconazole, chlorophyll content was higher in both plant groups grown in the light and the dark. In some studies, it was noted that a small amount of chlorophyll may accumulate in the dark in pea epicotyls (Boddi et al. 1999), cucumber cotyledons (Skupien et al. 2017). In our opinion, it is possible due to a slight chlorophyll accumulation during the release of pigments from scotomorphic seedlings in light. The use of gibberellic acid led to a slowdown in the synthesis of chlorophyll-a and total chlorophyll content in leaves. Since chlorophyll-a is the first to be synthesized in ontogenesis, the obtained results indicate inhibition of chlorophyll synthesis by gibberellin. This is evidenced by the increase in chlorophyll a content due to the action of the antigibberellic drug tebuconazole. There was a decrease in chlorophyll b content, which, in our opinion, indicates that the drug inhibits the process of conversion of these chlorophyll forms. It is considered to be that the pigment apparatus of etioplasts is represented by protochlorophyllides, and carotenoids are predominant form of pigments in etiolated plants. It is noteworthy that the content of carotenoids and the ratio of Chl(a+b)/K was much lower in scotomorphic seedlings than in photomorphic. Since it is known that light does not affect the synthesis of carotenoids, this indicates the absence of a complete membrane structure and protein factors responsible for the synthesis and localization of carotenoids in etioplasts.

Table 2. Pigment content in maize seedlings, cv. Aromatna on the day of 18 of germination, % per fresh matter.

In our opinion, the decrease in chlorophyll-a content due to gibberellin is associated with the phytohormone action on intergranular and granal thylakoids of chloroplasts, where the localization of photosystems I and II and their light-harvesting complexes are spatially separated (Janeckova et al. 2019). Whereas the chlorophyll content decreases under gibberellin action and increases under the action of antigibberellic drug tebuconazole, it, in our opinion, indicates inhibition of the formation of light-harvesting complexes of photosystems I and II by gibberellin.

Predominantly, the intensity of chlorophyll biosynthesis changes and its decay occurs in plants throughout life. However, the conditions that determine the regulation of the synthesis of catabolic enzymes responsible for chlorophyll decay remain unexplored. It is known that chlorophyllase is localized on the inner membrane of chloroplasts, but the mechanism of substrate-enzyme contact occurrence remains unclear (Okazawa et al. 2006). 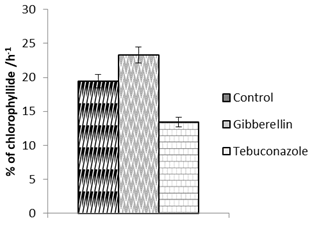 Figure 1: The influence of growth regulators on chlorophyllase activity in primary leaves of maize cv. Aromatna under photomorphogenesis on the day of 18 of germination.

It was found that lower chlorophyll content in photomorphic seedlings under the action of gibberellic acid was determined by the highest activity of this enzyme among all variants of the experiment.

Thus, the leaf thickness significantly decreased under the influence of gibberellic acid and increased under the action of tebuconazole in comparison to the control. Under the action of the antigibberellic drug tebuconazole there was a significant increase in the number of stomata per unit area of the abaxial leaf surface while reducing their linear size. Under the influence of tebuconazole, chlorophyll-a content was higher. There was a decrease in the content of chlorophyll b, which indicates that the drug inhibits the process of conversion of these forms of chlorophyll. The use of gibberellic acid led to a slowdown in the synthesis of chlorophyll-a and total chlorophyll content in leaves. The decrease in chlorophyll content was due to increased chlorophyllase activity.

Copyright: &copyThe Author(s) 2022. Published by Andriy Novikov, State Natural History Museum NAS of Ukraine on behalf of Modern Phytomorphology. This is an open access article distributed under the terms of the Creative Commons Attribution License, which permits unrestricted use, distribution, and reproduction in any medium, provided the original work is properly cited.